The pictures are still coming in!

Recently, Firefighter Dayna asked my friends on Facebook to take a picture of their four-legged friend or child with the cover of the July issue of Cesar's Way Magazine (or the article about me). These entries go into a drawing to win some very special items to help keep you and your family safe! Woof!

Today I received a picture of Wingo, a certified therapy dog working for the Morgan Nick Foundation. 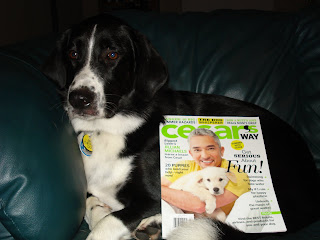 Wingo is a very special dog! According to his mom, Tara, Wingo started providing his services at the Morgan Nick Foundation, when he was about four weeks old and he has been working regularly ever since. She said he began going to safety events at three months of age and was an instant success with all of the children. Time after time, she said, he proves to be gentle with even the littlest and attentive to those apparently in need. This skill has been evident when people go into the foundation office as well. No matter the obvious stress and chaos in their lives, hearts melt and burdens become lighter after some attention from him.

Wingo's favorite activity is going to schools with the foundation staff to teach kids internet and real world safety. Tara says that because of Wingo, that children will be able to remember this empowering safety message long after he is gone. Because his undeniable talents, he is striving to become a courthouse dog in the future and be available to sit in with child victims during forensic interviewing and courtroom testimony.

Wingo, you are one cool dog! Thanks so much for the picture!

About the Morgan Nick Foundation:

I can't wait to see your pictures! Click HERE to learn more about how to submit your photo!