Sparkles' Safety Spot was live streamed from Unified Fire Authority in Salt Lake City, Utah on June 22nd. This 42nd Episode was streamed live with firefighters from Unified Fire Authority from Fire Station 101.
Unified Fire is the largest Fire Department in Utah, with 26 fire stations and 450 sworn firefighters and running 40,000 calls a year. Unified Fire has 2 Hazmat Teams, 2 Heavy Rescue Teams, a Dive Rescue Team, a Swift Water Rescue Team, a Bomb Squad, and many other unique divisions.
Putting something together like this takes a lot of work! Special thanks to Monica Colby, Dean Hunt, Benjamin Sharer, Z and Captain Karen Minchow for helping us put this episode together so quickly!
Zeteo ("Z") 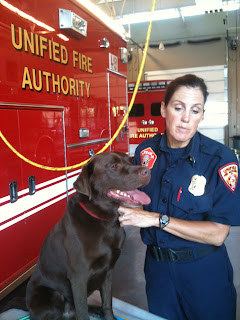 We were so excited that Zeteo, ("Z")  and his human, Captain Karen Minchow were on the show! Z is a chocolate Lab that works for the Urban Search and Rescue Team. The USAR team is called Utah Task Force 1. Z is trained to search for live victims in urban disaster settings like collapsed buildings and he also detects live human scent and
finds it.


Here are pictures from the big day!

If unable to see the video, please click HERE.